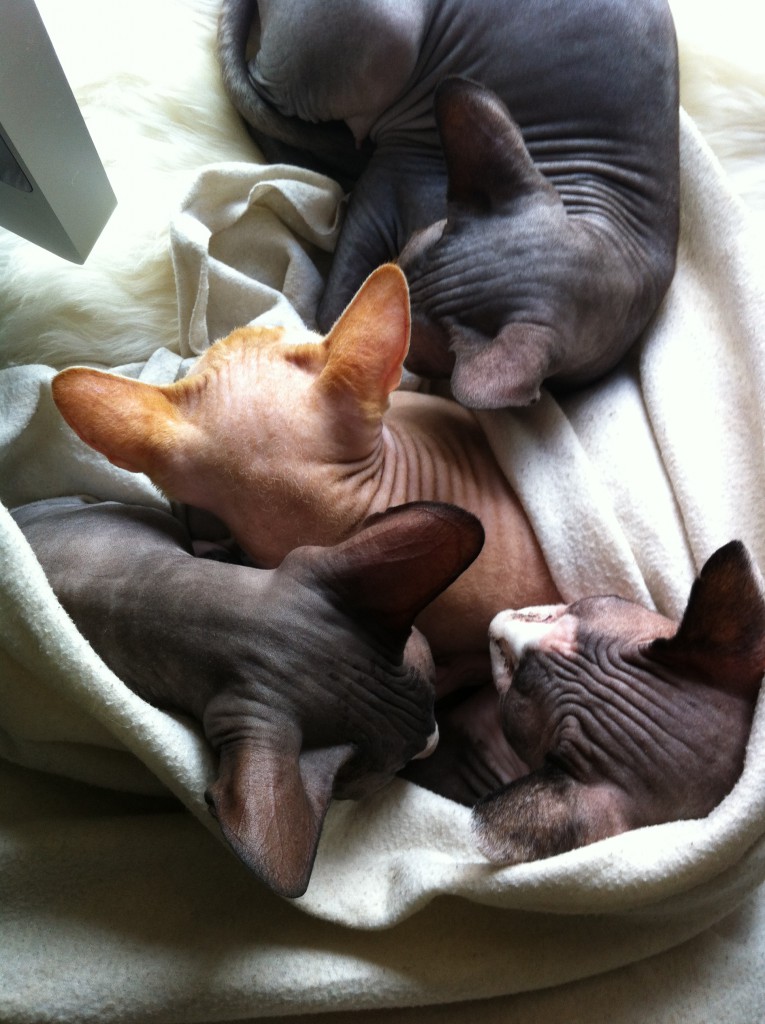 Passionated sphynx people with a small family run cattery, situated just outside Viborg, Denmark. You’re most welcome to write or call us, if you have any questions.

We’re currently inactive on the kitten front, but you can find quality Danish breeders right here.

If you just want to see pictures en masse, go to the blog.

Let me introduce us: I’m Anita, and my husband is Tom.

We got into the sphynx world by pure luck

My daughter introduced us to the race through Facebook in the summer of 2010, and even though my husband was not as taken with them as I was at first, the sphynx talk started in our home. And it just kept going.

My husband is highly allergic to cats, so I guess he felt quite safe in that discussion, knowing that we would never get one. But I researched a lot, and discovered that some allergic people could tolereate this race, so we went on the search for a danish sphynx owner that would let us come for a visit. That was a short search, since the sphynx people all seems to be as kind and sweet as their cats, so soon we had an appointment with Britt, from Talk About, to come and visit her and two of her cats.

I awaited that meeting with both joy and dread. Joy, for meeting this wonderful race for the first time in real life, and dread, if my dream would be crushed within minutes. Tom is usually reacting very fast, if there is or has been a cat in a room. Sometimes he can feel it, even if it have been weeks since there has been a cat visiting, so we would get a clear answer out of that visit.

When we finally arrived (it felt like I had been waiting forever), Britt’s cats were looking out through the glass door, and I was just smitten instantly. We spent a little over two hours with them, and no reaction at all, even though Tom got kisses from one of the cats, which would surely have gotten a reaction if nothing else would. But nothing. So I was happy as a clam when we got into the car to drive home.

We talked, and talked some more, both to each other and several sphynx breeders in Denmark. We talked to Helle Billing about one of her kittens, Dean Winchester, and to Kim, about her girl, Mynthe, but Dean was sold to another girl, and Mynthe was planned to stay in the cattery for future breeding. Then we finally talked to Henrik, who had an 8 months old sphynx and his great-grandfather, that he was planning to find a new home for, since he didn’t feel he had the time the cats deserved. After a lot of phone calls, we all agreed that the two boys should come and live with us.

In november 2010, Henrik came from Sweden where he lived at that time, with our two new family members. It must have been devastating for him, but I was thrilled to have them in our home. Sky and Nintendo has brightened our life every day since then. They are absolutely adorable, and very close attached.

In february 2011, after 3 months as sphynx owners, karma decided that Dean should come and live with us too. That same Dean, that we had hoped to buy the year before. What are the chances? His new owner wanted to focus on dog breeding instead, and just like that, we had 3 sphynxes. All males, all neutered.

We talked about perhaps getting a girl for breeding, once all the kids had moved out. That would give us room enough for kittens, and time to get to know the sphynx race even better. But we got a girl before that. Kim called us, and asked if we would consider buying Mynthe. Again, the same girl that we had talked to her about in 2010. Who could turn that offer down? So, in the summer 2012, Mynthe moved in. The kids were still at home, so no kittens plan before we had a separate room for her and her kittens. We now had sphynx number 4, and realized, that every word about not just having one sphynx was more truth than we ever would have thought.

A year after we got Mynthe, all kids had moved out to live on their own, and boy – I was happy to have cats, when that day arrived. After having kids living with you for 23 years, it sure is weird when they’re gone. But as the kids all tell us, we treat the cats like it was our children anyway, so they don’t see the difference 😉

We got our cattery name in october 2013: Castiel.
We hope to see some lovely wrinkly little kittens in our home at some point- it will be a blast!